Therapy with colours and coloured light is very old; it has been applied in all corners of the world and in all cultures. References to light therapy go back in time as far as ancient Egypt. There light therapy was used to support other therapy forms. of course in those days there was no artificial light: the old Egyptians used the light of the sun.

Sunlight shone in from above in chambers especially built for that purpose only. These chambers had no ceiling or roof, but were open. By means of coloured sheets which acted as ceiling the sunlight shining through was coloured in the same colour as the walls and the floor of the

chamber. In this way a treatment chamber was totally filled with one colour. The person receiving light treatment lay down in such a chamber for a session for fifteen minutes up to an hour. Generally one up to four of such sessions were prescribed.

In these days doctors worked with 8 different colours: dark blue, light blue, green, yellow, orange, bright red, dark red and gold. Great attention was given to the purity of the colour in the treatment chambers.

The blue colours were used by the Egyptian doctors for treatment of water related deficiencies (kidney and bladder). They applied green for relaxation and balance (physical, mental and emotional!) and yellow for the treatment of glands. Orange was applied in case of digestion problems (flatulence and bowels); the red colours for disorders of muscles, veins, heart and blood. Gold was applied for support of the nerves and for spirit and soul.

In ancient Greece there was a dedicated centre for light therapy, called Heliopolis (City of Light). In this centre people were exposed to

filtered sunlight. The Greeks had already studied the use of Colour Light for the treatment of tuberculosis.

At the end of the 17th century it was the English philosopher and mathematician Sir Isaac Newton, proposed modern concepts concerning colour. He experimented with prisms and proved that day light is a mix of the colours of the visible spectrum. 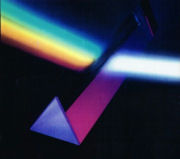 One hundred and fifty years after Newton, Johann Wolfgang Goethe defined the three primary colours (red, blue and yellow) and how the other colours of the rainbow could be composed of these three. He also recognized, that some colours are active and warm (red, orange, yellow) whereas others are passive and cold (green, blue, violet). Nowadays these principles are still taught and used in education, art and psychology. 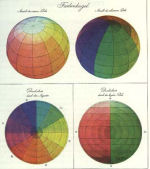 In the century following, doctors used colours to treat all kinds of disorders,  from psychological ailments to smallpox. In 1878 Dr. Edwin D. Babbitt published his book "Principles of Light and colour". In this book he described what he called Chromatotherapy (healing with coloured lights) as well as treatments for several disorders, among which were burns and nervousness.

At the beginning of the 20th century Dinshah Ghadiali, a naturalised American citizen of Indian birth, developed chromo therapy, building on the work of Babbitt. He applied light on the body using coloured filters. Ghadiali's system is based on matching the frequency of colours to the frequency of a disease pattern. 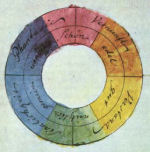 Dinshah made the radical step of considering disease according to its vibrational nature. He reasoned that all living things are imbued with specific energy patterns. Pathogenic organisms each have an original vibratory signature, some vibrating slowly (fungi), others rapidly (viruses). The lower frequency diseases resonate to the lower frequency colours -- the reds and oranges. The higher frequency diseases need higher frequency colours, such as violet and blue, to disperse them. He achieved spectacular results on diseases considered to be incurable (among which diabetes and tuberculosis). Applying innovative but controversial light treatments, Ghadiali spent much time in court rooms to defend his work.

In the 1950s and 60s John Nash Ott experimented with photography, working for Walt Disney Studios. He produced new artificial sources of light, which were almost identical to regular spectrum sunlight. Using his new light sources, Ott grew plants in his basement and realised that accentuating different parts of the light spectrum caused dramatic changes in growth patterns. From plants Ott moved on to experiments to discover how artificial light impacts on animals and humans, discovering the effect to be deleterious.  With the twenty-first century prevalence of the “three screen syndrome” (cinema, television and computer) and the phasing out of incandescent light bulbs, the damage to human health and well-being that Ott documented through his research, is on the increase, and the need for the full spectrum lighting he developed greater than ever.

Russian biologists showed that cells of plants communicated mutually, even separated by a quartz glass wall and that light is the carrier of biological information.

In 1947, the Swiss psychologist Dr. Maxim Luscher introduced the Luscher colour test, a form of colour therapy named after him, which is still 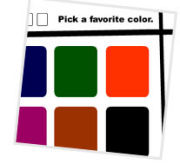 used by many psychologists. The test consists of narrowing down forty-three colours from a pallette of seventy-three. By analyzing which colours a person chooses or rejects the therapist gains insight in the psychological status of that person. If for example someone chooses especially dark colours it indicates that that person is in need of rest and relief of tension.

Concurrent with Luscher, the Russian scientist S.V. Krakov investigated the impact of colours on the nervous system. He observed that red stimulates the adrenal glands, raises the blood pressure and accelerates the heart beat, whereas blue light had a calming effect.

At the end of the 70’s Peter Mandel, colour visionary from Germany, started using Kirlian photography to make pictures of the toes and fingertips for diagnostic purposes. The pictures show subtle differences in electric charges as a result of pathological processes (diseases and disorders). Advanced  versions of this technique are in use today by many therapists. 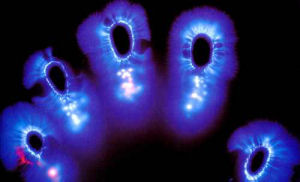 It was, however, another discovery of Mandel which laid the foundation of modern light therapy. He discovered that pain can be diminished in a couple of minutes by shining Colour Light on specific acupuncture points, irrespective of the condition that caused the pain. His further investigations have led to the discovery of manners to interpret and influence the emissions of light coming from the energy fields of the human body. Through the years Peter Mandel has developed a lot of treatments, consisting of the use of coloured lights on energy points on the human body.

The last decade light therapy has gained interest enormously: successful treatments have been developed for disorders related to depressions, sleep problems and hormonal imbalances. The remarkable results have also awoken the curiosity of modern science. There more and more proof is found for the fundamental law, which applies to all organisms in the universe (including to us, humans): all communication and all interaction between organisms is related to or is brought about by the energy of light!